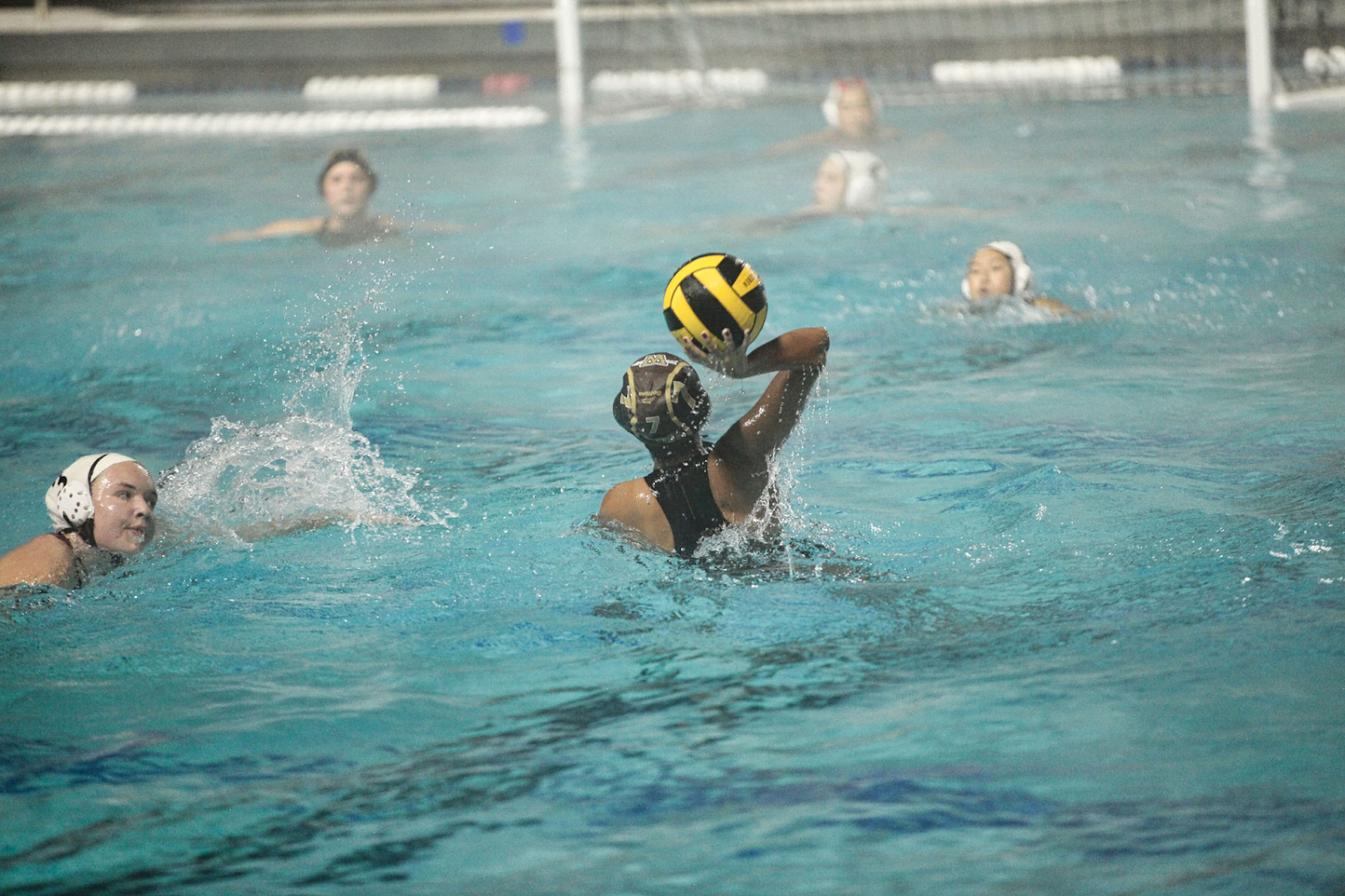 Devashree Misaal (10) focuses as she passes the ball to the left over to her teammate. The Jan. 3 game marked one of her greatest games of the season, with some very impressive plays. Photo courtesy of Sally Yuguchi.

Devashree Misaal (10) focuses as she passes the ball to the left over to her teammate. The Jan. 3 game marked one of her greatest games of the season, with some very impressive plays. Photo courtesy of Sally Yuguchi.

On Jan. 3, 2023, the West High Girls’ Water Polo Team triumphantly achieved their first wins of the season by defeating their rival school, Torrance High. This game marked an all-time high for the team, filled with standout plays and amazing players. The Varsity team came out of the game with an impressive final score of 8-2 and JV followed with 15-1.

Before the game, the varsity team was determined to take home their first win of the season. It would be the first league game for the team this year. Allison Tsai (12) was nervous as they “needed to win to have a chance of making CIF.” Tsai, as the goalie for the team, has an important job that is needed for both defense and communication. Tsai recalled the most impressive play of the game, when Felicity Matthews (12) made the “first set shot in the opening ten seconds” of the game. Matthews also had her best game of the year — scoring five goals. Another standout player was Faith Iwanaka (12), who had seven steals, two assists, and one goal while playing defensively.

The coach of the water polo teams, Sione White, claimed that the Girls’ Varsity team had an amazing defense by “not allowing a goal the last three quarters of the game.” He stated that because Torrance High practices at the same time they do, it was fun to witness friends playing against each other for their respective schools. When discussing the JV game, White highlighted Gigi Gabauer (11), who scored seven goals, as well as Devashree Misaal (10), who had four assists, two steals, and a goal. Precious Benitez (9) and Lauren Reed (10) were also praised for both scoring three goals.

Reed is the JV Captain and a strong set player. She starts off every game by fistbumping their goalie, Miela Preuett (10), as a good luck ritual. Reed remembered that in this game she specifically was “able to pass to some freshman and new players and see them score their first goals.” Reed was proud of being able to help her team by being an outlet and assisting newer players. She explained how teamwork is the most important part of water polo, saying “it takes each and every player to lead us to victory.”

In this game, the Girls’ Water Polo Team displayed the perseverance and skill characteristic of students at West High. They had an immaculate game, beating Torrance High out of the park and securing their rank among other teams.