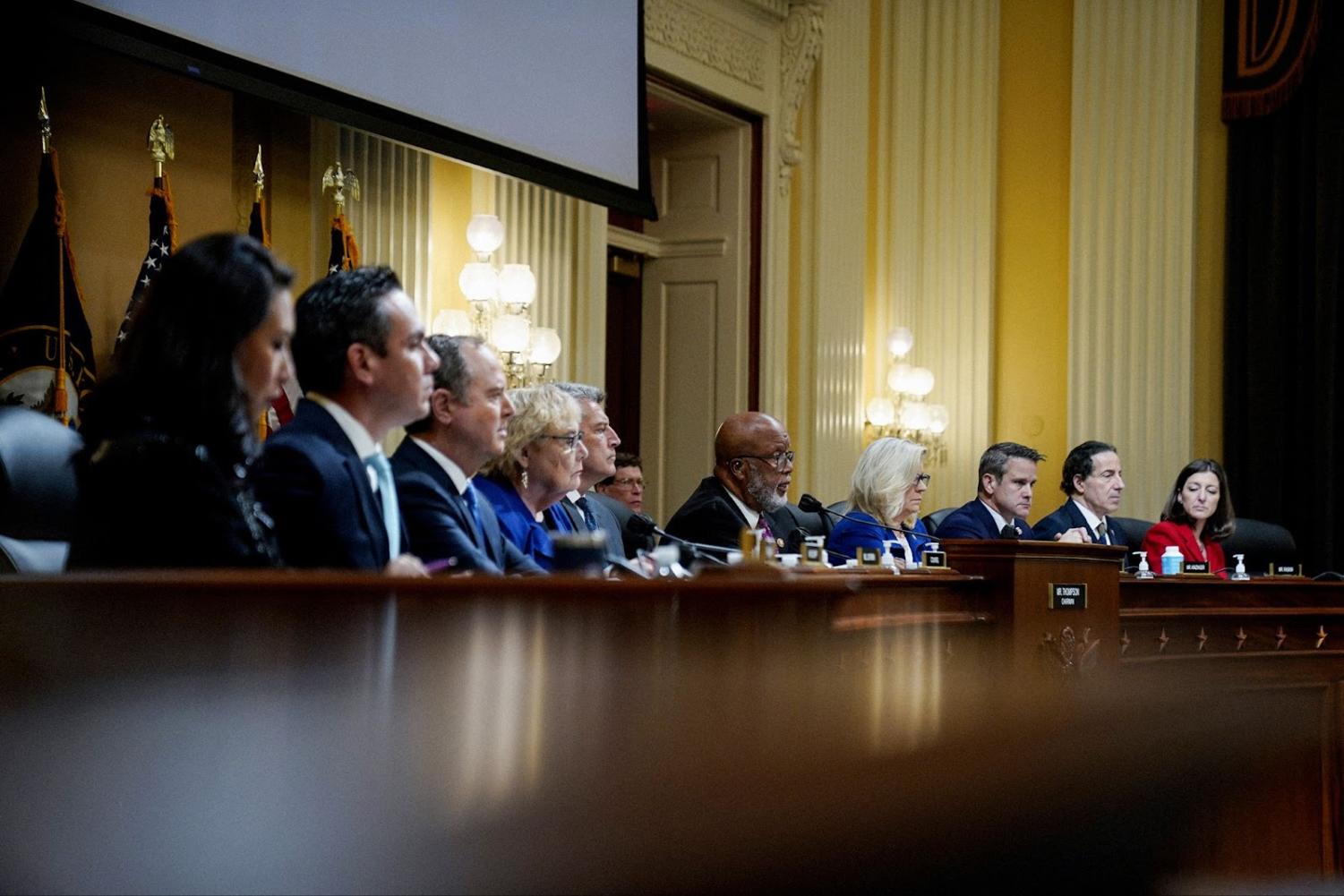 Originally set to reconvene on September 28, the January 6th Select Committee postponed its ninth hearing to October 13 due to Hurricane Ian’s ravaging of the Florida coast. The proceedings were the latest in a chain of public hearings since June to investigate the insurrection at the United States Capitol on January 6, 2021 by a rallygoer-turned-mob, along with former president Donald Trump’s potential culpability.

The latest hearings communicated disturbing new details about the extent of Trump’s knowledge of the events, with Committee member Pete Aguilar (D-Ca.) asserting that “Trump knew what he was doing, sending an angry mob, a number of whom were clad in tactical gear and military garb armed with various weapons, to the Capitol.” The Committee went on to share communications between members of the Secret Service, who received tips of possible violence at the Capitol as early as Christmas Eve 2020. One Secret Service report acknowledged on the day of the riot of “possible armed individuals, one with a Glock, one with a rifle.” As the day wore on, the Committee illustrated, various leaders tried to get ahold of Trump, including House Minority Leader Kevin McCarthy (R-Ca.), who, like many others, urged the president to take swift action to dispel the rioters and condemn the violence.

In addition, former Twitter employee Anika Navaroli, who requested anonymity in previous testimony, came forward with details on how Twitter colleagues were “nervously monitoring the situation throughout the day,” noting an uptick in violent rhetoric and hashtags on the social media platform particularly aimed at then-Vice President, Mike Pence.

Meanwhile, in never-before-seen footage presented by the Committee, House Speaker Nancy Pelosi (D-Ca.), along with Senate Majority Leader Chuck Schumer (D-N.Y.) and Senate Minority Leader Mitch McConnell (R-Ky.), could be seen from an undisclosed location within the Capitol contacting the Virginia and Maryland National Guard and the Department of Defense as they sought ways to contain the situation. Additional footage showed a perturbed Pelosi and others watching the harrowing event as it unfolded on live TV.

In what Committee Chair Bennie Thompson (D-Ms.) described as a “serious and extraordinary” move, the committee concluded the hearings by unanimously voting to subpoena Trump to testify, with Thompson remarking ahead of the vote that “[there] is precedent in American history for Congress to compel the testimony of a president” as grounds for the decision.

These new revelations add to a growing laundry list of legal woes faced by the former president; coupled with the ongoing Mar-a-Lago investigation and the New York deposition last August, “there’s a lot of ambiguity as to the future” of Trump’s political career, observed politically-active West High student Raphael Rebucas (12).

While the Select Committee cannot prosecute Trump if he is found complicit in the events leading up to and surrounding January 6, its comprehensive report could corroborate the findings of the concurrent Justice Department investigation. Government and macroeconomics teacher Mr. Hettinger delineated that the committee has “served a purpose to . . . inform” and “show America what happened,” similar to the 9/11 Commission. The Justice Department, conversely, would handle the “criminal matters for trespassing in the Capitol or assaulting the police.”

As to whether Trump will comply with the subpoena remains to be seen, with the former president issuing a scathing 14-page response that lambasted the Committee’s unanimous decision as “a charade and Witch Hunt” and reiterated claims of a “rigged and stolen” election. Rhetoric aside, the Select Committee is not a standing nor a sub-permanent one of Congress, Mr. Hettinger explained, meaning that if the Republican Party wins the House majority in the upcoming Midterms, the “Committee is gonna get disbanded, I’m sure within ten days,” Mr. Hettinger speculated. In addition, Trump will likely mount legal contestations that defer his testimony until after the subpoena expires at the end of the Congressional term.

While the outcome of the investigation is still pending and legal pressure continues to spell uncertainty for the former president’s political future, the attack on the Capitol will surely leave a lasting imprint on American democracy. Rebucas and Mr. Hettinger hold differing views on the extent to which Trump was legally responsible for inciting the insurrection. Rebucas contended that it is impossible to measure the implications of a rhetorically-charged speech; instead, violence needs to be held accountable, not the public servants who “were doing their job and trying to rally a crowd.” Conversely, Mr. Hettinger expressed his dismay “that there’s clear evidence that [Trump has] done wrong things” and yet many “are kind of shrugging it off.” Nevertheless, both agree that the public, including students at West High who are eligible to vote, can hold the former president accountable, voicing their approval or disapproval of his actions at the ballot box. Mr. Hettinger concluded our interview by conveying his hopes that people will “not just walk away with cynicism, but will walk away with [the] conviction that . . . they need to be part of the solution.”