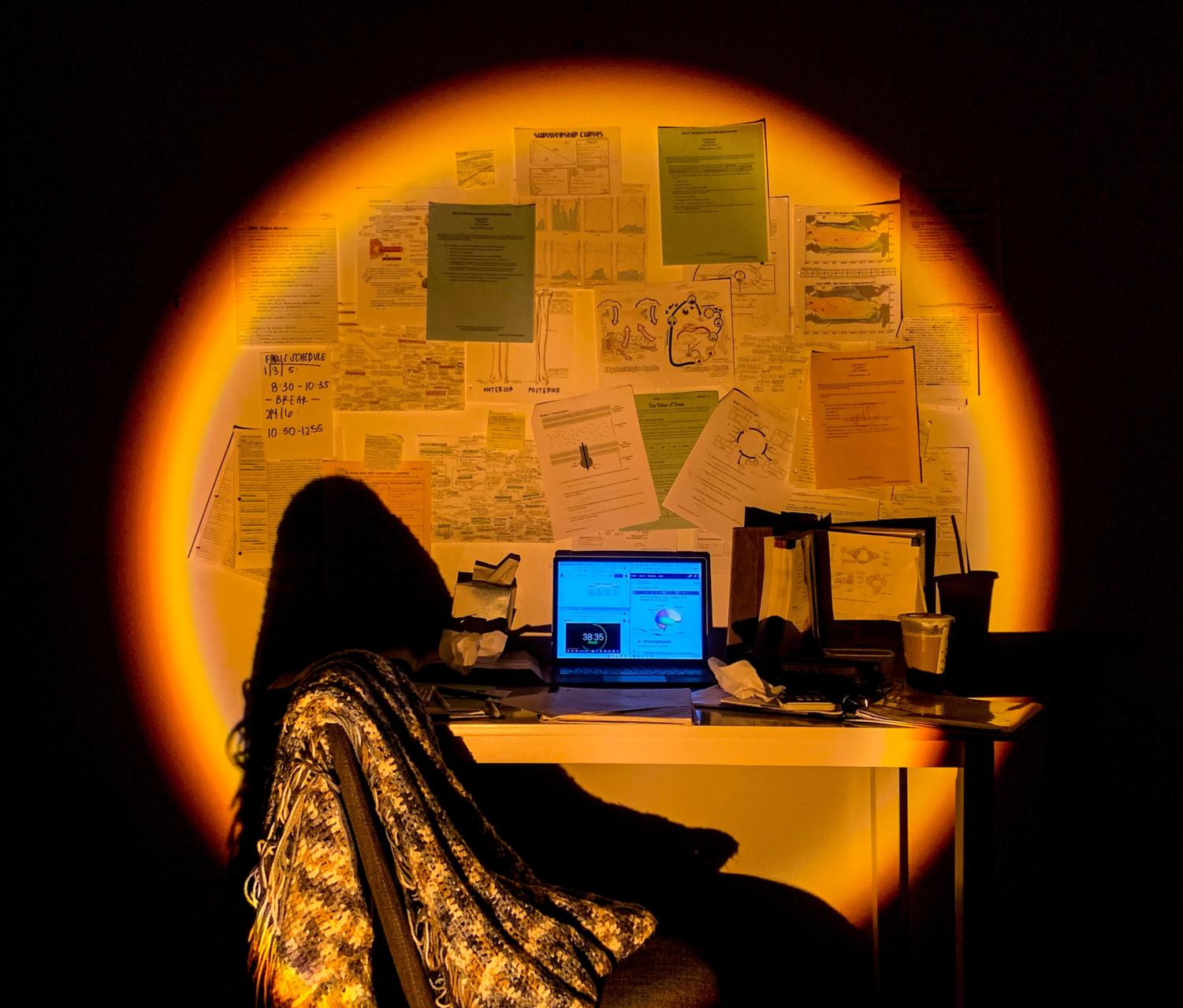 For hours on end at the latest points of the night, students reinforced their learning with intense study methods and lots of coffee during finals week. A time that could be incredibly isolating could also be a time of great growth— it is a demonstration of the hard work and persistence students performed over the semester. (Art/Photo by Sidney Hinks)

For hours on end at the latest points of the night, students reinforced their learning with intense study methods and lots of coffee during finals week. A time that could be incredibly isolating could also be a time of great growth— it is a demonstration of the hard work and persistence students performed over the semester.

When January comes to mind, you might immediately envision several things – from layer-worthy cold to pelting rain to hot chocolate, there’s no shortage of new things the new month brings. Along with it is the inevitable promise of finals – a series of exams, projects, and tests, the thought of which lingers over the heads of many students for weeks. The word finals also brings to mind another inevitable task – studying. Though the tests may seem daunting, former Teacher of the Year Mrs. Hettinger takes a more optimistic viewpoint, believing that it should be seen as an opportunity for students to improve themselves rather than something to dread. “As a teacher, our goal is that a final wouldn’t be something terrible for students but rather an opportunity for them to show us something,” she stated encouragingly.

From surfing the internet to doing the tried-and-true textbook practice problem, there’s no shortage of resources available for students to access to study. However, Mrs. Hettinger encouraged students to go straight to their teachers if they had trouble understanding material. Though she acknowledges the natural fear students have of consulting the staff, she emphasizes that teachers are there to help students regardless of their level of confidence in the subject: “As teachers, we want to help our students, but they’re sometimes so afraid to go see us out of the fear of looking dumb. We want to help them, and we don’t care if they haven’t understood it or not,” she explained.

Although understanding all of the enormous amount of learning content and schoolwork is a challenge for many students, honors student Jodie Cheng (11) found that staying organized through the use of written schedules had helped her through many late nights filled with homework. As a percussionist in West High’s Entertainment unit as well as an AP class taker, Cheng realized how much of a benefit there was to sorting out her daily schedule. “One way I manage my time well is by using a planner and prioritizing things based on deadlines. Keeping track of everything in a calendar and a planner really helps me,” she expressed. Cheng found that gradual daily studying, rather than cram sessions, helped her enormously. “You can’t really just cram everything in three days beforehand, you have to actually space everything out before your actual test,” she explained.

Studying isn’t an individual activity for many students- with the help of friends, it can actually prove to be even more efficient and even a fun task. Academic Decathlon member Keene Lei (9) described how studying with friends gave him a stronger sense of responsibility to stay on track. “When I’m working with other people, they help keep me on track. It would be weird for me to go and start goofing off, so there’s a bit of accountability when you’re working with friends,” he stated. Fellow Academic Decathlon member Qinghan Jia (10) concurred with him: “Friends are really important for de-stressing, especially if you have similar classes. There’s a sense that you’re in the same boat when you guys are working together.”

Though studying for finals is the first priority for many students, your own well-being should be taken care of. According to Warrior Focus Board Member Beckett Tom (12), stamina achieved through a healthy amount of rest and good eating habits is a must-have in order to succeed during finals: “Make sure you don’t have too much sugar in one meal. Your energy levels might crash afterwards, and you want to be able to have enough energy to keep going. You’ll need a lot of endurance for finals!” he exclaimed. Unfortunately, since many students have such hectic schedules, it may be hard for them to find time for themselves. In order to remedy this, Tom and fellow Warrior Focus Board Member Riyana Roy (12) had taken it upon themselves to organize de-stressing activities for students- otherwise known as Wellness Week. Throughout the week, activities like yoga and giving helpful tips to practice mindfulness aim to assist students in taking care of themselves when they can’t find time outside of school. However, Tom lamented the fact that awareness for mental health had been treated as a taboo topic rather than one that should be prioritized. “In general, a lot of people aren’t willing to give enough attention to mental health. I think there needs to be some kind of incentive to get people to come to our events because people might overlook it otherwise,” he stated sadly.

Despite the challenges that finals pose for many students, overcoming them is achievable –with the help of those around us, it can be seen as a chance to improve rather than something to give up on.