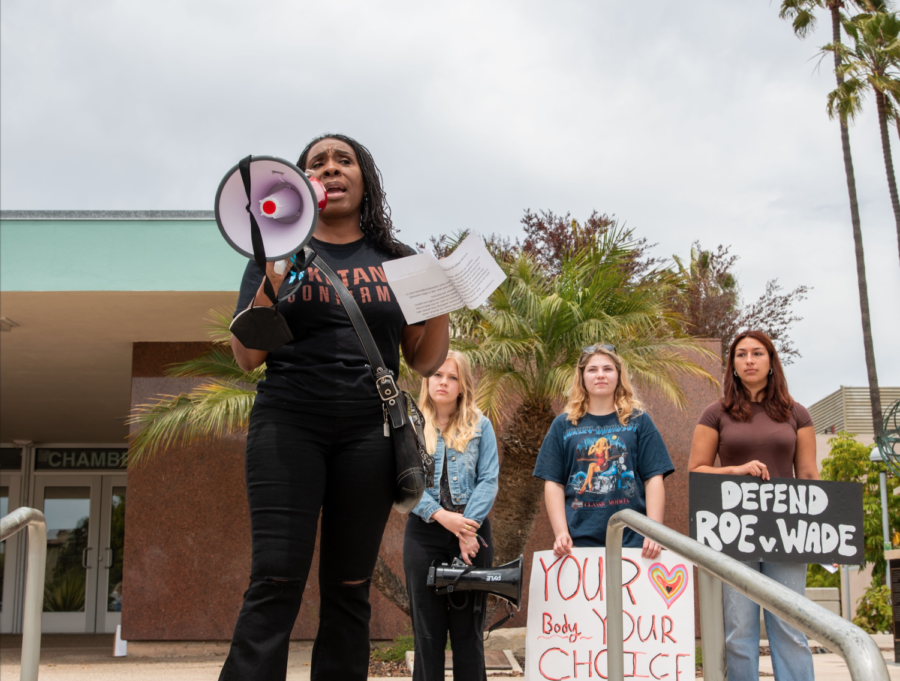 At an abortion rights protest at the Redondo Beach Public Library, Nichelle Henderson, an LA Community College District Board Trustee spoke on pro-choice abortion rights. Alongside other speakers, Henderson recounted her personal experience with abortion and warned others on the dangers of banning it. Photo Courtesy of High Tide, Redondo Union High School’s News.

At an abortion rights protest at the Redondo Beach Public Library, Nichelle Henderson, an LA Community College District Board Trustee spoke on pro-choice abortion rights. Alongside other speakers, Henderson recounted her personal experience with abortion and warned others on the dangers of banning it. Photo Courtesy of High Tide, Redondo Union High School’s News.

A Month Post-Roe: Going Beyond Abortion

Following the overturning of Roe v. Wade on June 24, the battle over abortion has left drastic and polarizing changes in its path. Since then, eight states have restricted abortion services, including South Dakota, Texas, Oklahoma, Alabama, and Wisconsin, with many others expected to enact bans in the future according to The New York Times.

The decision sparked a mixed response from students. Pro-life student Frank Wong (12) said that overturning Roe goes beyond preventing abortions, but rather preserving lives. “The baby has done nothing wrong and does not deserve [to die],” Wong explained. “The child is still human no matter where they are [in development].”

But not everyone approved of the decision. Women of West Co-President Alina Marcu (12) said she was “in complete shock and deeply saddened” by the Supreme Court’s decision. Although she was aware of the draft majority opinion leaked on May 2, revealing that the overturn is possible, she thought it was unlikely considering the 50 years of federal legal precedent Roe offered. Marcu fears that not only will more unsafe abortions occur, but also children that are born from unwanted pregnancies may not be properly cared for. “It is completely unfair to everybody in the situation to be forced to have a child when one is not even able to take care of themselves . . . let alone a baby,” she said. But Wong argued that “if [the baby] might potentially suffer, what’s the logic in killing them? You’re clearly hurting [the baby through an abortion].”

To combat abortion bans in their home state, some women have been seeking care out of state. States such as California serve as a refuge for those seeking abortions. A few weeks prior to Roe’s overturning, Governor Gavin Newsom created a law to eliminate cost-sharing requirements for abortions such as co-pays and deductibles, making abortion more financially accessible. Immediately after the overturn, Newsom signed further legislation to protect abortion providers from civil liability when treating women who travel to California from an abortion-banning state. Alongside Oregon’s Governor Kate Brown and Washington’s Governor Jay Inslee, the three created the West Coast offense which aims to create a “safe haven” for women by allowing easy access to out-of-state reproductive care.

In response to public pressure following the overturning of Roe, President Joe Biden signed an executive order on July 8 that aims to protect abortion access nationally. While it doesn’t reverse the Supreme Court decision, the order includes setting up clinics near the borders of abortion-restricting states and offering volunteer lawyers to aid those seeking or providing medical care. While some see this as a step in the right direction for reproductive rights, Marcu believes more can be done. “While all of that sounds nice, states would be able to go against it and ban it,” she cautioned. The order has little to no effect in states such as Alabama and Mississippi, which have already banned abortion. Although Wong doesn’t support Biden’s plan to increase abortion access, he is in favor of Biden’s attempts to protect contraception access. “I think if you ban abortion, you should make birth control an option,” Wong said. “If you really don’t want to have a baby, then I think birth control should be the preventative step.”

Despite the decision being about abortion, those including Marcu worry that the overturning of Roe will have heavy implications on other privacy cases Obergefell v. Hodges, protecting same-sex marriage, and Griswold v. Connecticut, protecting the right to purchase and use contraceptives by married couples. “Somehow Roe v. Wade was not protected so I would not be surprised if something like this was to happen again,” Marcu said. One explanation behind the Court’s decision is that abortion is not mentioned in the Constitution, nor “deeply rooted in this Nation’s history and tradition,” according to the majority opinion. Some fear these same arguments will be applied to future cases, especially after Justice Clarence Thomas wrote that the Court should reconsider other due process precedents such as Obergefell and Griswold.

With uncertainty for the future of these cases, it is clear that the battle over these privacy cases is far from over.