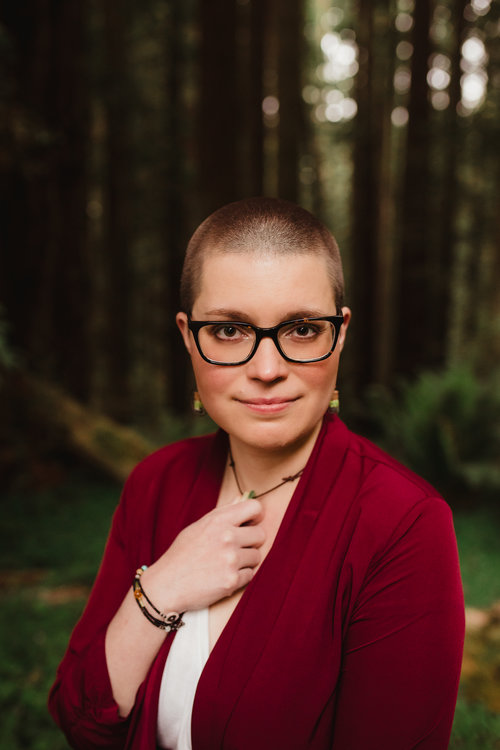 Our seemingly simple city of Torrance was able to shape one of today’s famous science fiction writers, Becky Chambers. Chambers is currently working on a new novel, but in the meantime, readers can also look forward to her next release in July: Prayer for the Crown Shy, a novella serving as a sequel to another one of Chamber’s novellas, A Psalm for the Wild-Built. Photo courtesy of Other Scribbles.

To many of its locals, life in Torrance is Steve’s Charbroiled Burgers, Bonello’s Pizza, and unlimited beach trips. Growing up in it all was Becky Chambers. This former West High Warrior now resides 700 miles away in the redwood forest as a renowned science fiction writer. With popular titles including her Hugo Award-winning Wayfarers series and more, Chambers pushed past our city (and planet) boundaries to share stories that are out of this world.

Chambers has been in love with the world of writing since childhood, attempting to write her first book at the age of seven. “I’ve always loved to write,” Chambers expressed. “I feel that it’s the way I communicate best and it’s the way that I like to process the world . . . I can’t imagine life without it!” Such a burning passion for writing paired with a love for science fiction has shaped Chambers into the author she is today.

Additionally, as a West High alumna, Chambers credited her science fiction and fantasy class (an English elective previously offered at West) for feeding her love for science fiction even further: “It completely changed my perspective on the genre. It was something I’d always thought was really fun and exciting, and something I liked to nerd out about. . . . But actually reading the books . . . That’s where I went, ‘wow!’” she explained with a smile. In the class, students learned about the history of science fiction and the formative works of the genre. Reading critically was an essential skill in the class, but unlike any other linear literature class, Chambers and her classmates often dove into the big-picture topics in science fiction. Through this elective, Chambers was able to discover science fiction on a deeper level: “Sci-fi is not actually about the future or about aliens. . . . It’s always a product of the here and the now! Learning to dissect the stories that seemed so fantastical but were actually about real world issues: that was a skill I learned in that class.”

Now, as a published science fiction author, Chambers spends much of her time researching and writing, but she is also always on the prowl for inspiration. Chambers explained her writing process with an analogy: “I like to compare writing a book to making dinner out of whatever leftovers you have in the fridge; it’s all these different pieces of my life smushed together. It might be something in a science book I read, it could be something from a random conversation I had with a friend, it could be something in a movie I watched. . . . I’m just sort of a magpie with things of interest!” While libraries and the internet are her key tools when it comes to researching scientific concepts, Chambers’ inspiration for her stories comes from nearly everything in the world around her.

Chambers is most known for her Wayfarers book series, which includes The Long Way to a Small, Angry Planet; A Closed and Common Orbit; Record of a Spaceborn Few; and The Galaxy, and the Ground Within. On the surface, the series is a classic space opera: stories of big intergalactic communities, politics, alien species, and space colonies. However, Chambers’ books offer a new perspective in the space opera world. She explained, “Instead of making stories about the ‘heroes’ and the ‘chosen ones of the galaxy’ . . . I decided to flip the camera around and focus on the ordinary people living within that universe.” Furthermore, each book follows a different cast of characters, with very few making appearances in other books within the series. Chambers added, “[The series] is sort of like these different slices of life happening throughout the galaxy. . . . It’s really intended to just give the reader this escape into a future [they] could be a part of.”  Chambers’ series is able to appeal to readers as they “don’t have to be some sort of rebel hero or space princess,” to see themselves in the narrative.

For Chambers, adding onto an ongoing project for years to come sounds like a dream. However, as an author writing under contracts, her work aligns with her deadlines. Writing a novel typically takes a year to a year and a half to complete. Writing professionally may not conform to the usual nine to five work week, but the commitment is just the same. “I take my weekends off but during the week it’s my writing time, my research time, or whatever it needs to be. It is very much a full time job,” Chambers said.

However, pursuing a writing career doesn’t typically mean immediately writing novels. Prior to her science fiction works, Chambers wrote content and technical writing, as well as  a weekly column of video game reviews. Through it all she knew she had always wanted to write fiction. But fiction writing can be a difficult field to navigate for many authors. “The honest part of it is that a lot of people can’t necessarily write fiction full time,” Chambers said. “A lot of people do have side gigs or part time jobs to make ends meet . . . For me though, I love being able to focus on fiction full time because it means I can really dive into the nitty gritty details.”

Though the early stages of careers in writing can be slow and rocky, Chambers encouraged future writers to persevere! However, perseverance does not include overworking yourself. While hard work and effort are essential for reaching your goals, Chambers also emphasized the importance of self care: “You’ve got to take care of yourself. We definitely romanticize the idea of burning out creatively, and these ideas that you have to suffer for your art: we have to stay up all night, we’re all fueled up on coffee ― it’s not. You need to sleep and you need to eat your veggies and you need to hang out with your friends, because if you don’t take care of your brain and your body, you’re not going to be able to keep up the stamina you need to write a book.” Artistic career paths can be tough, but you can lighten the weight by taking care of yourself. Chambers added, “If anybody ever tells you that if you’re not burning yourself out, you’re not doing it right, don’t listen to them. You will always have plenty of time to write, but there’s nothing more important than you.”