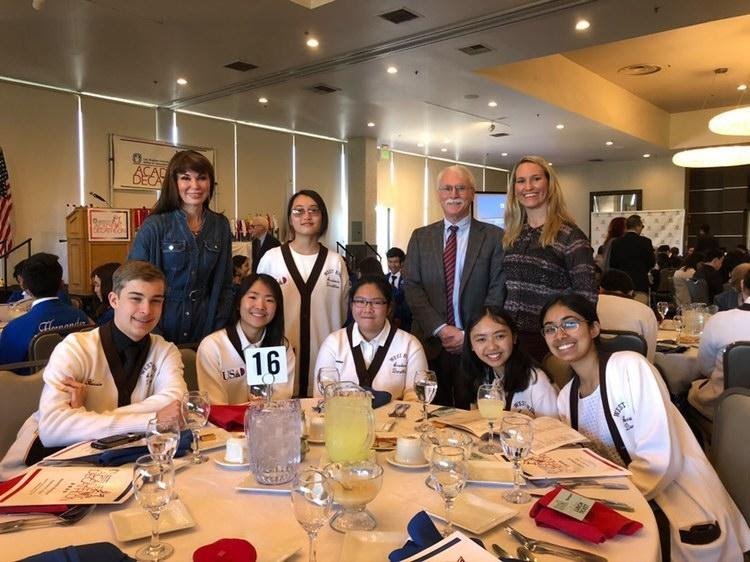 The Academic Decathlon team at the LA County competition in 2020, the last in-person competition. During the 2020 competition, the West’s Acadec placed third out of a total of 39 teams. Photo Courtesy of Shreya Reddi (12).

The name “Academic Decathlon” (or Acadec) is an intimidating term. With it comes the image of perfect straight-A students competing about their knowledge of Shakespeare’s plays or Newton’s contribution to science. However, Acadec is about so much more than surface level knowledge. It’s about learning to work with a team and spending time on skills that one may want to improve on. With a new head coach (Mrs. Hettinger), West High’s Academic Decathlon works to once again learn what it means to be a well-rounded team.

According to Mrs. Hettinger, Academic Decathlon is a “competitive team that studies ten different events,” namely math, science, history, economics, social science, literature, music, art, speech, essay, and interview. Available for students of all grades and grade point averages (even currently they are looking for a student with a GPA under 3.2,) the team studies the subjects based on a specific theme that they are given each year.

For the 2021-2022 school year, competitors will be learning everything there is to know about water. Within their studies, students learn about subjects that help them prepare for future classes, or learn to develop skills that they may have been hesitant about in the past. One of the current captains of Acadec, Shreya Reddi (12) has spoken of her previous fear of the speech and interview categories. Now, they are some of her favorite events. Enthusiastically, she said that these portions give students opportunities to “voice [their] opinions to adults” when “as kids and as highschool students, [they] just aren’t given the option to be heard because [they’re] seen as young and less mature.” The members’ preparation in the subjects all lead up to the LA County competition in January, where West High has won more championships than any other team in the past.

While learning is an important part of Acadec, many members emphasize that the best thing about joining has been the community. Reddi says that she has learned how important the role of every member on the team is. She spoke of how teams and even companies “place the most important person or the most important role as the captain, or the CEO.” But she later learned “not just as a captain, but as a member of the team, how important everyone’s efforts are.”

A first time member of the team, Andrew Yan (9) has also already noticed the importance of teamwork as a part of Acadec. He emphasized how “helping each other in the work is needed if you want to do well.” He recalls how students would stand outside the classroom before a quiz, and that he would “usually see people helping each other study.”

Similarly, Reddi spoke of her love for being able to teach underclassmen on subjects that they have not yet learned in school. With the late nights and long hours that team members spend with each other, it seems almost impossible not to bond.

West High’s Academic Decathlon is so much more than an award-winning team that dedicates itself to learning new things. It is a close group of students who work with one another by helping each other grow. As a community, they work together slowly, one step at a time, in order to become the best that they can be.