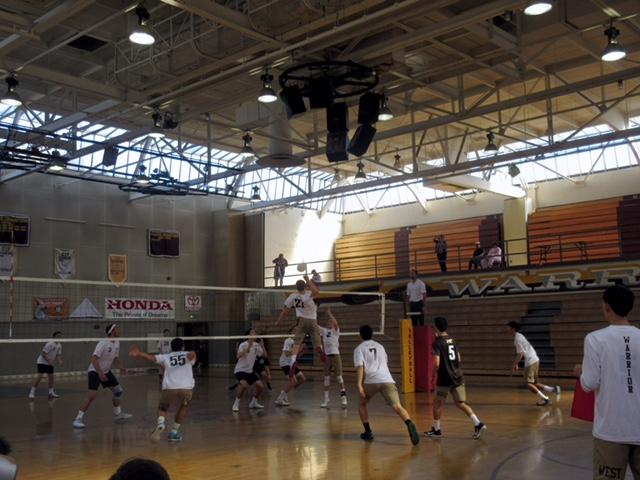 The West High Boys’ Volleyball team lost to the South High Spartans on Thursday March 30 at home, three matches to zero.  South won the first match 25-14, the second 25-21, and the third match 25-13.

In the second match, multiple Warrior blocks allowed the Warriors to keep the game close and within range of winning.  In the end, West could not take the lead from the Spartans, losing the match by only 4 points.

In the third match, several defensive plays gave West the momentum to come back late in the match, but West could not overcome the early deficit.

“Today we did not have much energy at all. To bounce back [from this loss] we need to come into the start of the game with energy and…  communicate much more,” said player Noah Carroll (12).

Player Preston Young (11) believed that although West lost three matches to none, they outplayed South in terms of defense when they believed they could win.

“Although we ended up going home with a loss, it was quite clear that we had them beat in defense. We dug a high percentage of their hits and our overall hustle was amazing…. There were certainly moments where our mood plummeted parallel with the game, and caused us to get in our own heads. This

resulted in a few hopeless plays, as the communication just wasn’t there at all. Easy balls were dropping and sometimes the ball was just watched as it floated to our side of the net.”

“We weren’t nearly as aggressive as we needed to be if we wanted to win. Against a team like South, you need to match them, and push back just as much as they’re putting pressure on you.”

Following this loss, the Warriors will take on the Cathedral Phantoms away on Friday March 31 at 6:00 p.m.  Come out and support them as they attempt to bounce back.