TikTok and Teens: A Tug-of-War 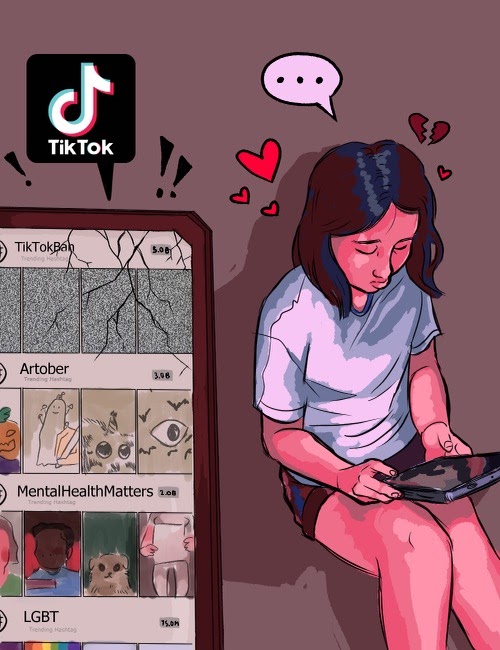 Although TikTok has its fair share of ups and downs, is this ban the way to fix it?

Like every other teen, I’ve downloaded TikTok, enjoyed watching the 15-second videos, and even created my own. I genuinely enjoyed the app. However, after noticing my ever-growing addiction, I deleted it. From then on, TikTok didn’t seep into my life, but it seems like that’s not the case for millions of others.

Sure, TikTok is good entertainment; as Pranati Anna (9) points out, “[TikTok] is where I found cool things to do.”

The investigation started when leaked documents showed that TikTok censored videos with topics sensitive to the Communist Party of China. This censorship was evident back in November, when 17-year-old Feroza Aziz was suspended from the app after posting a three-part video about the Chinese oppression of its Uighur Muslim population. TikTok dismissed the suspension as “human moderation errors.” Based in China, TikTok is subject to Chinese law, which requires the company to comply with government intelligence operations. Fear of censorship on TikTok is rooted in the fact that the Chinese government can censor any video deemed sensitive and request access to user data.

However, that isn’t why I was relieved when I heard of the ban; it’s because of the type of information spread on TikTok that I supported some aspects of the Trump administration’s decision. While I had the app, I noticed how TikTok culture normalizes certain offensive things. TikTok continually showed me “jokes” based on Asian stereotypes. Creators frequently post videos mocking accents or feeding into the stereotype that all Asians are smart. I’d initially laugh, and then stop and realize how damaging the joke really was.

One particular video stood out to me. It was made by a popular creator, who is white and male. The video said that Indian boys didn’t have a certain “type” of girls they liked because they were lucky to have any girl even take a second look ― he suggested that Indian boys weren’t attractive to girls. Others may see my reaction as overly sensitive, but it hurt me to see so many similar jokes, especially since the audience usually didn’t recognize the videos as racist.

I also noticed the lack of diverse representation in popular creators. There are very few non-white users who gain large followings. While there’s a lack of racial representation in almost every field, from Instagram to Hollywood, the lack of diversity in TikTok is especially notable, as it fosters racial insensitivity ― which leads to a culture of normalized racism.

I’m not alone when I feel TikTok is toxic. One user, Manaal Sultan (12), remarked, “I think TikTok can be quite toxic sometimes and I have personal issues with it.”

But what I have come to understand is this: it’s not the fault of TikTok ― or any app. It’s the fault of the creators: the people on social media platforms that enable racist jokes, stereotyping, and a lack of representation. My initial dislike of the app is diverted to its users and how a lot of their content is “toxic.” TikTok isn’t alone, as many other platforms deal with similar issues regarding racial insults and a lack of diversity.

Regarding the Trump administration’s ban, as Sultan said, “I think it’s restrictive on freedom of speech, and the president getting involved in a social media app meant for teenagers is really strange.” There is no fair reason for the government to ban an app plagued with the same issues as many other platforms, especially since TikTok doesn’t directly harm the government or endanger the safety of its users.

As for the threat posed by TikTok’s Chinese roots, Oracle and Walmart, companies based in the U.S., have recently become partial owners of the app, hoping to prevent the government from banning it. For now, the Trump administration doesn’t seem to be taking active steps toward a ban, so many users can continue scrolling; hopefully with a newfound awareness of the cultural insensitivity the app and its users still foster.