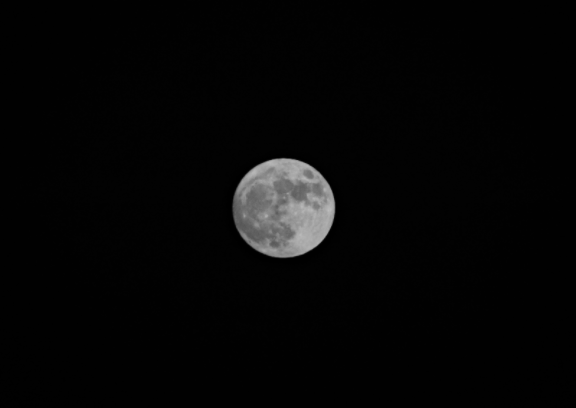 With the full moon shining this Halloween, NASA’s recent announcement about finding water on the Moon has us all looking upwards. Mrs. McCulloch (Earth & Space Science and Physics) expressed that NASA’s discovery, “is re-exciting people to have that child-like wonder and curiosity. I think that’s the bigger impact.”

Colonizing the Moon has always been a large trope within science fiction, dating before the first humans were sent to space. But even after advancements in technology and space travel, the idea of sustaining long-term life on the Moon presented challenges, including access to water. Scientists hadn’t found any viable option.

But on October 26th, NASA revealed that there is more water distributed across the Moon than originally thought, potentially impacting the upcoming Artemis program set to launch in 2024.

When the Apollo program returned from their expedition in 1969, it was thought that the Moon was completely dry. Although they brought back moon-rock samples that had traces of water, they assumed that it was a result of contamination. But a few decades later it was confirmed that there was ice in the permanently shadowed areas of the Moon’s polar regions called “cold traps” due to their extremely low temperatures.

Meanwhile, multiple other telescopes broadly observed the sunnier areas of the Moon and found evidence of hydration. Unfortunately, they were unable to distinguish whether this hydration was water or hydroxyl, a common ingredient in drain cleaner.

A paper published in Nature Astronomy explained that the Stratospheric Observatory for Infrared Astronomy (SOFIA) was the telescope that offered them a solution. This Boeing 727SP jetliner was modified to hold a large telescope that could fly above 99 percent of Earth’s infrared-blocking atmosphere to give astronomers a clearer look at the solar system. With SOFIA, the team could detect the water molecules’ unique chemical fingerprint through infrared wavelengths. It determined that the hydration they uncovered in the Clavius Crater was, in fact, water.

Science Olympiad member Nadia Goiset (12) revealed her surprise when it was announced. She shared that “It’s already rare and pretty amazing that ice was found on the moon in general. But finding [water molecules] on the more sunny areas shows that there’s so much more for us to explore and find that may not originally seem possible.”

But this discovery raises many questions, especially about where the water came from or how it is being stored. Without a thick atmosphere, the water across the sunlit surface should evaporate from the harsh temperatures. But somehow the molecules survived.

NASA researchers believe this could be due to micrometeorites distributing small amounts of water when they hit the lunar surface. It could also be that the Sun’s solar winds delivered hydrogen, causing a chemical reaction with the minerals in the soil to create hydroxyl. At the same time, radiation from the micrometeorites transforms that hydroxyl into water.

As for how it is stored, the water may be kept in glassy, bead like structures on lunar soil created from the high heat of micrometeorite impacts. Another possibility is that the water is being packed between grains of lunar soil, protecting it from the heat.

Aside from these hypotheses, researchers found that the lunar soil in the Clavius Crater was about 12 ounces per cubic meter, about 100 times dryer than the Sahara Desert. Despite the small amount found, this water can still be a game-changer for future space exploration. NASA researcher Anthony Colaprete explained that “Even at small concentrations (<1%) water can be used to help shield astronauts from radiation. At higher concentrations, it can be affordably used to make the elements needed for rocket fuel.” This could aid in trips home to Earth, or even expeditions to Mars.

The water on the Moon could also cut down expenses. It costs approximately ten thousand dollars to bring a pound of supplies to space. By using lunar water, astronauts could reduce the water they carry, allowing them to bring along more equipment to enable new scientific discoveries. In addition, these molecules could also be broken down into hydrogen and oxygen molecules for astronauts to breathe. Needless to say, there are a multitude of ways this newfound water can be utilized.

Although these uses may seem extraordinary, West’s Earth and Space Science teacher Ms. McCulloch, expressed her concerns over this thought process. She explained that “I worry about the mindset that everything we find and every new discovery is automatically for us, and automatically viewed through the lens of, ‘How can we use this? How can we benefit from it as a species?’”

Though she agrees that this water would be a great step towards NASA’s goal of lunar colonization and further space exploration, she emphasizes the importance of proceeding ethically. “I think there needs to be a discussion about should we be trying to take all the water from [the Moon]. It needs to be done in a way that’s respectful of everyone’s needs, not just a select few.”

There are still many unknowns about this revelation such as how to extract this water or what role it plays in the inner solar system. Regardless, this still has large implications for the upcoming Artemis program, including identifying the criteria for a new landing site and allowing astronauts the possibility of living off the Moon’s resources. Although many challenges still exist, this discovery has brought NASA a step closer to turning science fiction into reality.