Winners of the Night 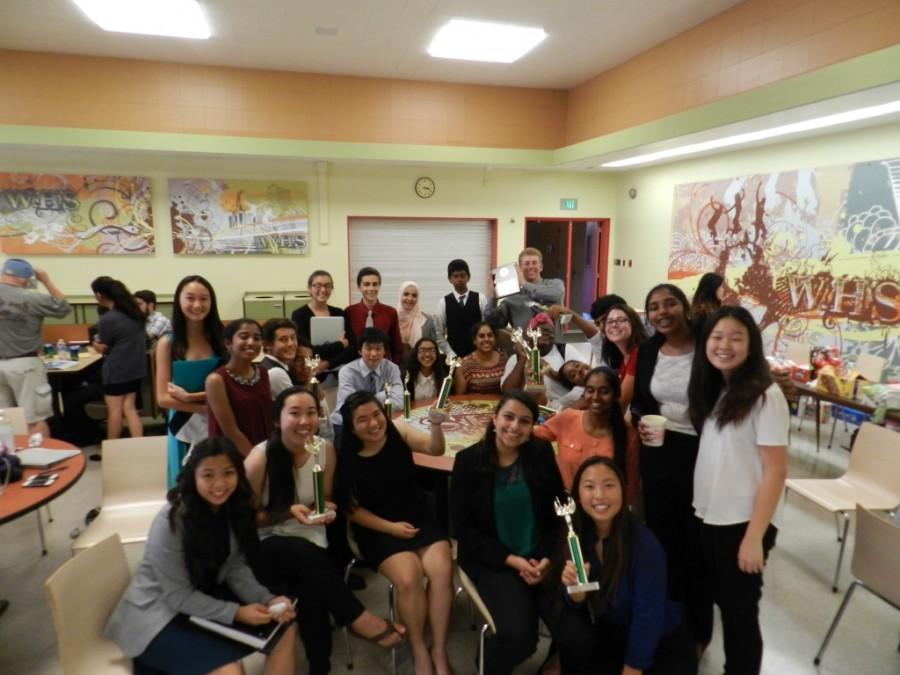 This past Saturday, students from West High and other schools woke up at 6 a.m., put on their power suits and headed to the 2015 Western Bay Forensics League (WBFL) Fall Congress & Debate tournament at West. Upon arrival, participants were seen anxiously perfecting their pieces while talking to walls and frantically making last-minute-touch ups before their round began.

West debater, Ghazi Aryan (11), said, “[the] team spends a month competing for the case and then plays Devil’s Advocate the whole morning of the tournament building up [their] anxiety until the rounds start.”

Unlike Aryan who was able to keep calm before performing, Audrey Kono (10) can’t control her nerves and said, “I freaked out a lot last year as a novice and my team would yell at me because I’m the freak-out-person of speech and debate.” However she also said, “Once you get in [the round], you just have to recognize that since you’re already there you might as well do the best you can and will get better as time goes on.”

The day started with Student Congress where students choose to debate on the affirmation or negation on a piece of legislation. Students are evaluated on their research and debating skills. Everyone pretends to be a representative in a mock congressional debate and tries to persuade the judge to lean towards their side. All competitors is referred to as Senator (Last name here), and a student volunteers to serve as the presiding officer who will make sure that the debate goes smoothly. They do this by picking who to call on, opening and closing the legislation for discussion, and getting people to speak. Rashmika Veturi (10) said the topics they talked about were capping executive compensation, how wi-fi should be available to the open public, Donald Trump, and lastly a bill to incentive clean-fuel vehicles.

After Congress, participants debated on different topics and again, used their research and speaking skills to get the judge to vote for their side. There were four events left for the WBFL Fall Congress and Debate: Policy, Public Forum,  Lincoln-Douglas and Parliamentary. The resolutions were; the United States federal government should decrease its domestic surveillance, the federal government ought to pay reparations to African-Americans, and that adolescents ought to have the right to make their own medical choices, respectively. For Parliamentary debate, the debaters received the topic twenty minutes before and had to create the case then.

Hana Schlosser (12) and partner Ysabella Atehortua (10), debated against students from Leuzinger High School and Archer School for Girls on whether the government should pay reparations to African-Americans. The girls had a heated debate with Archer and ended up beating them, coming out with two wins but then a loss from South High School in the final round. Schlosser said, “I felt good about going 2-1, especially since Ysabella and I were nervous about our second round when we saw who our opponents were. Controlling your nerves is something that comes with experience in debate, but it helps a lot to be positive.”

Some of the results from the tournament are as followed:

Keep it up Warriors!