Singing in a Winter Wonderland! 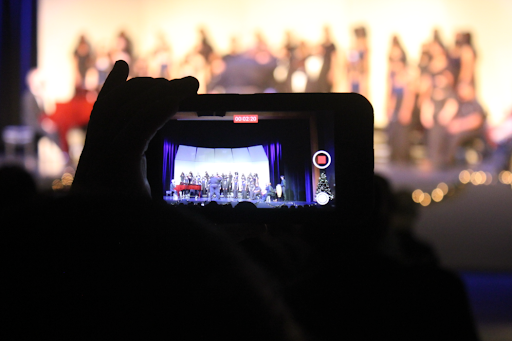 Cameras of friends, families, and guardians are aimed at the stage, seen from every other seat. After a year devoid of concerts on West’s campus, the 2021 Winter Wonderland Concert was important for many. From filming Instagram stories to posting on family Facebook pages, this was an important moment to record. Nervous performers knew the significance of the event, so choir director Mr. Dowdle advised them to “just relax. Enjoy yourself. Everything else will be okay.” Photo courtesy of Naoya Yoshimura.

Lights, camera, action! On a chilly December 10, minutes before 7 p.m., a line of families and friends snaked around the Performing Arts Center (PAC). As the crowd flooded through the doors and into the house’s seats, a group of singers fidgeted backstage. Both the audience and performers were bustling; one from excitement and the other from stage-fright jitters. Soon, carols and jingles would fill all ears in the PAC with merriness. West High’s 2021 Winter Wonderland Concert was about to begin!

Traditionally, such concerts would run for two hours or more. But, some difficulties cut the concert shorter: fewer choir students as there were pre-COVID, new regulations to follow, and some miscommunications. Everyone was frazzled and nervous starting out; with technical difficulties in the admission process and the restrictive obstacles of having a masked, distanced performance. However, it was soon resolved and encouraged the exultant finale of “Betelehemu.”

Prior to the finale, an array of songs were performed by both Aristocracy and Concert Choir — a mix of normal Concert Choir and Aria students. The audience cheered and laughed as Concert Choir opened with “God Rest You Merry Gentlemen” and “Grandma Got Run Over by a Reindeer.”

Following that was a West tradition: the much-adored song, “Let Us Go & See Him,” performed by all choirs. Originally, this concert was supposed to mark the last performance of this traditional song since it was planned on being discontinued. However, after hearing it all together during rehearsal, Mr. Dowdle, West’s new choir director, was convinced to keep it.

The song had 6 soloists; Chloe Thomas (12), Radley Drouillard (12), Alyssa Reamer (12), Hailey Shah (12), Keira White (12), and Sarah Bacon (12). Only seniors are allowed to perform solos, so many students spend most of their choir years waiting for the chance at one.

Years ago, Drouillard would’ve been “insanely nervous” at any spotlight. But after gaining performance experience over time, solos and crowds didn’t bother him anymore. During the concert, Drouillard readily sang his part — he “didn’t get nervous at all!” After years of preparation, he and many other singers made this performance one of their best.

Next was Aristocracy’s section with “Mary Did You Know,” “Deck the Halls,” “Good King Kong Looked Out,” “Ocho Kandelikas,” and “Carol of the Bells.” Singers in “Mary Did You Know,” walked down the aisles with candles in hand, as was the tradition. They spread around to take advantage of the building’s reverberative walls and lulled the audience with the acapella harmony. The rest of their section followed that soothing manner. Then came the finale.

Topping the concert off with an upbeat finish, singers swayed and clapped “Betelehemu.” The instruments stomping and rattling, performers joyfully caroling: The audience was captivated! “Betelehemu” is a Nigerian Christmas song introduced by Mr. Dowdle. This piece holds a special place in his heart, as it was the first one he ever directed.

Aristocracy member and choir board Historian Reamer was incredibly pleased with this year’s concert: “I was really proud of us! We sounded pretty together and we recovered from a lot of our mistakes to where they weren’t noticeable.”

While there are flukes and obstacles, Mr. Dowdle only looks to improve every year. “There’s some tempo issues or memorization issues. Sometimes intonation issues,” he described. Those are the “general big three dynamics to listen for and improve on.”

It’s all a part of the experience and memories that make it special; all to persevere for the best performance. This concert, the first West has had in-person in over a year, demonstrated that: “[Music] is one of the biggest components of my life,” reflected Drouillard. “The lessons I learned from it will carry on throughout my life.”