A Closer Look Into Play Production 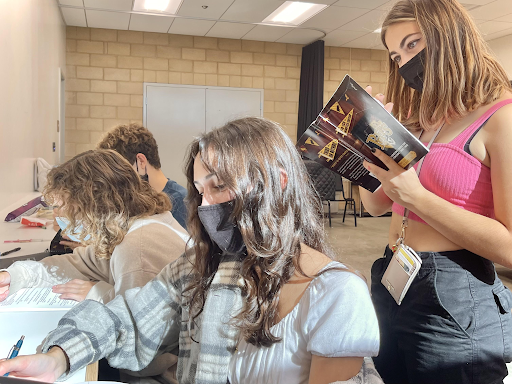 Preparing for this year’s Fall play, Play Production members Taylor Gulbrandsen (11), Jade Leone (11), and Natalia Torres (11) study their lines as they prepare for rehearsal. “I’m excited to have an in person audience,” Leone expressed. “It’s been a while since we have been able to have people watch [the plays] in person!” West students, staff, and families will be able to enjoy the show live in the West High Performing Arts Center on November 18, 19, and 20.

Bright lights, booming voices, and exciting choreography: this is what West High Play Production brings to the stage every year. But behind the curtain is the rush of casting, rehearsal, and tons of practice.

These past couple weeks, Play Production (Play Prod) have been preparing for this year’s Fall play, Puffs, a comedic spinoff of the Harry Potter series. And as preparations for a West High Theater show begin, so does the nail-biting process of callbacks and auditions. The students in Play Prod first begin the process by choosing characters to audition for. Though it sounds like one of the more simple steps of the audition process, a lot more thought goes into deciding potential roles than you’d think. To guide this decision, the cast members typically read through scenes and analyze each character. For Gabi Bartholo-Cox (10), finding personal connection to her character is essential: “If I can relate to the character, then I can play the character well, and I also enjoy the character more because I feel that connection.”

Following the selection of preferred roles is a series of group script readings. Each student is assigned different characters, while West’s Play Prod teacher, Ms. Orabuena (Ms. O), observes how each actor portrays and characterizes different roles. But this audition system isn’t only beneficial for the judges. “It’s always cool to see how different people read for the same role,” senior cast member Angie Oakley (12) said. “You can take bits and pieces of other people’s interpretations of characters into your own.”

After lots of thought and consideration, Ms. O sends out the callback list, gathering students in the Performing Arts Center to repeat another (more refined) group reading. Behind the scenes, the cast members give their all in hopes of receiving their desired roles. Natalia Torres (11) shared that to prepare for auditions, students typically “practice characteristics and acting out different emotions through acting exercises.”

Auditioning for the same roles as your peers has the potential to create a competitive environment, but Play Prod students are able to create a safe and supportive space. “The people in Play Prod are really welcoming and inviting… that’s exactly why I really like it,” Torres said.

Then together, the Play Prod family waits anxiously for the cast results via email. The minute it’s sent out, cast members across the campus can be seen celebrating the casting of the new stage play.

Just like that, the nerve-wracking auditions and callbacks come to a close. Now comes weeks and weeks of rehearsals as cast members prepare to make this show another great one for West High.