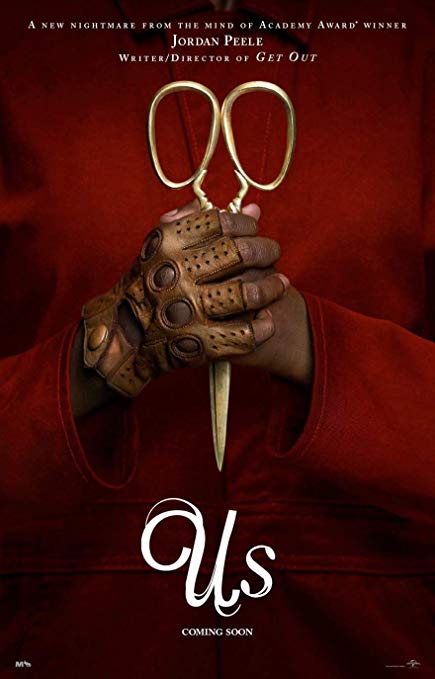 After his 2017 Academy Award winner Get Out, Jordan Peele is back with his new psychological horror-thriller, Us.

The widely anticipated movie was premiered on March 8th at South by Southwest, and was released in theaters on March 22nd, staring Lupita Nyong’o. The blood-curdling thriller is a journey of a family’s beach house vacation that ends up turning into a nightmare.

The project was first announced by Peele in May 2018 when he revealed the film poster and release date on twitter. Fans were hooked as soon as the film trailer was dropped on Christmas Day, 2018. Despite the trailer being slightly over a minute long, fans analyzed every second of it in hopes of prognosticating what was to come.

I personally did not know about this movie until it came out and I began reading and hearing fan reviews. That was when I decided to go watch it myself and see what exactly made this movie special.

According to Vox film critic Alissa Wilkinson, the title of the movie signals a significantly deeper meaning with an additional specificity: US = United States. At the post-premiere Q&A session, Peele revealed that the film is essentially about “America’s misplaced fear of outsiders.”

Hafsa Haris (10), a supporter of the film’s  message, commented, “This is certainly a prevalent controversial issue all over the world today, not only in the United States. I really like how it’s cleverly being portrayed in this movie. People hear about these political issues all the time, but I believe that the message is a lot more powerful when it’s delivered in a creative manner as it is in this movie.”

On Wednesday, April 10th, I got the nerve to go watch the movie myself and see if it’s truly as horrific as people described it to be, and I have to admit that I still have some difficulty sleeping.

The movie starts off ordinarily like any other movie, with the Wilsons on their beach-house vacation, but before you know it, the horror presents itself and begins to escalate quite severely as soon as the “Tethered” enter the plot. Despite its blood-curdling horror, I thought the message was extremely powerful and creative.

Grace Fitzer (10), commented on the movie genre after watching the movie saying, “Horror movies have long been recognized as a very successful genre. I think the main aspect that sets this particular movie apart from others is the powerful message it conveys. Most horror movies don’t necessarily include a thoughtful message which is what makes Us special.”

Similar to Peele’s Get Out which addresses controversial issues like racism and discrimination, Us cleverly addresses an issue in modern American society that I believe is extremely important, and that is our irrational fear of “outsiders.”

One of the clever aspects of this particular movie is the awareness it brings to the issue by making the audience wonder who the true monsters are and whether the real outsiders are who we think they are.

I thought that the most powerful impact of the movie was the pondering question it left at the back of people’s minds. It left us all wondering who the real monsters were: the Wilsons or the doppelgängers?

As Peele describes, this movie is fundamentally concerned with the attitudes of the American people, for everyone is quick at pointing fingers, while in reality, the real monster we need to search for could have our face—maybe it’s us.