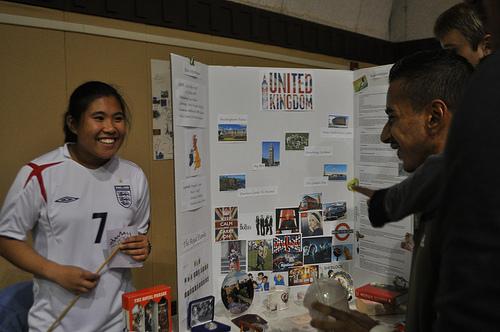 On Friday, February 13th, West High history classes gathered in the Pavilion to celebrate the many cultures of our students. Booths were set up representing different parts of the world and offered fun facts, trivia questions, and props from each country. At the booths, you were to carry a card and get a signature from the each booth you visited, giving onlookers a chance to enter into a raffle. Students were also able to watch their friends perform acts that reflected their nationality, and at the end of the event, each history class sent up one representative to compete in the annual Multi-Cultural Day geography competition, where contestants had to write down the name of a country, city, or landmark according to the hints given by the announcer. Multi-Cultural Day is a simple and creative way to experience the backgrounds of West High students without leaving campus.

Though there were many enjoyable aspects about Multi-Cultural Day, there were some parts that stood out to some students. Moira Camacho (11) has been one of the performers at the event for the last two years and thinks highly of Multi-Cultural Day. She loves being able to share her background and experience the world in one day. “The event made me feel like I was traveling the world in one place and seeing the different booths and clothing from different countries was awesome and I had the privilege to sing in my language.”

Brennan Korshavn (12) really enjoys Multi-Cultural Day and thinks that it’s a great way to be exposed to other cultures. Although the entire event was entertaining and interesting, the main problem was time management. Korshavn said “I thought the whole event ran smoothly. My favorite part was the performances because they were each from a different country, but during the game when you guess the songs, I felt like we should have had more time to answer.” Camacho added “Some acts were cut for time every period so I think having shorter performances would allow more performances because some were longer than others.”

World geography teacher and supervisor of the event, Mr. Phelps enjoys being able to bring everybody together for a day and acknowledge the different ethnicities among West High. “I like the fact that [cultures] get to be celebrated and appreciated that day. I’m not expecting every student to leave and have a whole new outlook, but if at least something is taken away from it, it’s worthwhile.”